After many years of reading all of the articles of bodybuilding, physical culture and physical training that I could lay my hands on, here I am sitting down to write my own system of bodybuilding. I will be very happy if my system of exercises does as much for you as it has done for me.
I recall impatiently waiting for the muscle magazines to appear on the newsstands each month so that I could buy them and see what all the great experts and authors had to say on the subject of bodybuilding. I read each article very carefully and sometimes more than once. I found that I had a great deal to learn, and I could get something from each and every one of them.
I honestly believe that any boy or man that wants to, can build his body to very good proportions - if he is conscientious and determined to do so. It is strictly a matter of "stick to it." We must not get discouraged if things do not progress as rapidly as we had hoped - but definitely, in time, the advances will show for themselves, and before you know it, you can take a tape measure and prove to yourself what has happened.
I sincerely believe that there should be a course in every high school in the United States in weight lifting and bodybuilding. Many a boy who would like to take up bodybuilding finds that it is impossible for him to join a gym because sometimes they are not in his vicinity and other times the fee is above what he is able to pay.
Naturally, it is better to workout in a gym, but there are many who get together and form their own groups and start working out by themselves - buying as much equipment as they possibly can. I believe that one can get the necessary results whether they work at home or in a gym - but I also think it is better for two or more people to workout together. Somehow or other, this gives a sort of competitive feeling, and naturally everyone trying to outdo the other makes for an enjoyable hour while, at the same time, achieving the benefits which come from proper exercise.
I have had the pleasure of meeting a great many young bodybuilders personally and have found that many of them have gotten together and worked out in the basement of one of their members who lives in a private house. I was really quite surprised at the wonderful development of these youngsters because they had done all of their work without the guidance of any particular person - but are just following the articles that they read in the muscle magazines. This proves my theory that anyone who really is serious about building up his body can do so if they have the determination and will power to do so.
It was several months after I won the title of "Mr. America" in Chicago, that Sig Klein - the famous athlete and bodybuilder - invited me to appear at a show that he was giving in New York. I was really thrilled because I had never been to New York and had long looked forward to seeing this great city. While I was in New York, I decided to write a series of essays on the methods I used in the building of my body, and what it was that made it possible for me to win the title of Mr. America. I liked the idea, but not being a writer, I was a bit hesitant about putting the methods that I use on paper, but after thinking it over, I decided that it might be a good idea. Over the years, many people have wondered what my approach to bodybuilding is, how I trained to win the Mr. America, Mr. World and Mr. Universe titles, and what manner or techniques I employed while working out to build my body. This book represents my attempt to answer those questions.
In conclusion, I should like to say that I think to be fit and in shape is a great thing. But it should not dominate and rule your life. I believe your life should be balanced. And I would recommend that a person have a symmetrical, classical type physique.
- Steve Reeves
Back to Dynamic Muscle Building, main page 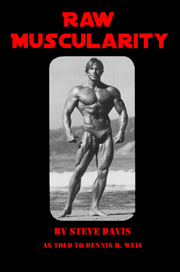