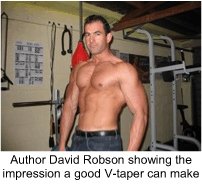 One thing all bodybuilding enthusiasts will agree upon is the importance of outstanding symmetry to cap off an impressively muscular physique. To possess great symmetry means to demonstrate a desirable ratio of assembled body parts, each harmoniously flowing into a well-balanced whole to convey physical perfection. One undersized muscle group contrasting sharply with an otherwise muscle packed fame does not a symmetrical physique make.
If you can, however, balance out all body parts to where no one grouping overshadows the other then, my friend, you have good muscle symmetry. Some of the greatest bodybuilding champs in all of the history of physical culture could even be justly described as not very “muscular”, unlike, that is, those muscle-bound, and less successful, behemoths to which they are routinely compared.
It is all about balance folks. Having massive arms and small legs really defeats the purpose of training to build the “body”, as a good one half of it is here being neglected in favor of that which one can more readily expose in that tight-fitting T-shirt. So lesson number one in any study into the many complexities the multidisciplinary sport and activity of bodybuilding presents must surely be: always train for balance and the size - and aesthetical development necessary to create the illusion of a tremendous muscle mass distribution - will take care of itself.
Lesson two might be: leave your ego at the gym door and train all body parts, not just those more obvious appendages that look good in clothing. But what of those poor souls who, despite training all body parts with equal intensity over many years, continue to possess a lopsided look to their physiques? They look as if God, in his almighty wisdom, forgot to bestow upon them the genes necessary for complete muscular development.
Well, having assisted thousands of people to achieve their health and fitness goals, the advice I would give in this instance is, firstly, never give up hope and always train your physique as an integrated whole; never neglect a single muscle fiber and seek out especially those groupings that respond slower, and prioritize them until they are in line with the remainder of your physique. 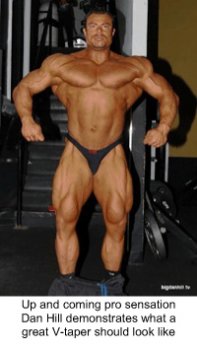 Secondly, I would advise the genetically shortchanged among us to work the hell out of their shoulders – in particular the side deltoids – train their lat muscles with the utmost of intensity and bomb their abs into submission on a routine basis. Sound like fun? Well, this article will tell you exactly you can joyfully bust your blood vessels pounding the weights so as to force new growth in your shoulders and lat muscles while refining your abs until they become marble-like in appearance. By using the principles suggested here, you will build that desired, yet elusive, V-taper, a trait that has helped more people win the Mr. Olympia than possibly all others combined.
There is one thing all physique champions have in common: a great cobra-like appearance through their upper back muscles – originating from a tiny waist - which broadens into a wide set of bowling ball shoulders to project the illusion of immense size and, at the same time, great aesthetics. Many a 180-pound competitor has, onstage, passed themselves off as a 220-plus monster on this very basis. So if you want the best V-taper around - one that will, in the extremely shallow and superficial world in which we live, get you noticed - then read on.
Thrash the side laterals
What ultimately sets apart those truly spectacular physiques from the other 90 percent of us is excellent side deltoid development: those half-cantaloupe-like structures that signify extreme shoulder width. Onstage, or on the beach, a wide appearance is most certainly impressive and without a respectable set of side deltoids you can more or less kiss goodbye the prospect of ever have a truly great physique. How do we build boulder shoulders? No, not with Synthol, though its use is becoming increasingly common in today’s wacky world of body manipulation for the express purpose of being better than the next guy! No, we use an exercise that has created more shoulder width than any other. Bottom line: all champions, from past to present, are as wide as houses. Their side deltoid development ensures this impressive look and the dumbbell side lateral raise is, in a majority of cases, responsible for procuring it.
To maximize execution of the side lateral – in which one raises a dumbbell, on each side of the body, to slightly above shoulder height before lowering it in a controlled fashion – always be sure to keep the tension on the movement and muscles at all times. Being that the side deltoids – working alone they are comparatively small, weak muscles - are isolated during the side lateral, fighting gravity as they make their descent is for them a difficult task. 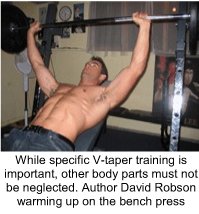 For most people who are new to advanced weight training, especially prevalent is the “dramatic drop” as the dumbbells are near-forcibly lowered to “starting” position. This is to be avoided. Each time we let gravity take its course – in any bodybuilding movement and especially during those, like the side lateral, designed to hammer stubborn muscle groupings that need to be routinely targeted with maximal intensity – we risk heavily diluting muscle fiber recruitment.
If we simply, during dumbbell laterals, heave the weights up and let them fall on their own accord, we miss the point of specificity of training. Bodybuilding training, at its very essence, is all about sustained stimulation of the body parts being targeted. The key? When looking to increase, and maintain, high intensity, never take your eye off the ball. Always maintain complete focus to establish that fashionable ‘80s training construct, the mind/muscle connection. Only then can you build side deltoids to rival the greatest champions.
Target the chin
In the world of MMA, targeting the chin might result in one opponent lying prostrate in a seemingly lifeless heap, another hands raised in victory as “new champion” and 500,000 dollars richer. In the less belligerent bodybuilding universe, however, the humble chin can be an athlete’s best friend, a valuable weapon in their arsenal of bodybuilding tricks. Chinning: the act of pulling oneself, using their arms as levers and back - specifically lat - muscles to power chest to bar, to develop that coveted wedge shape between waist and deltoids.
Whenever we chin – preferably using a slightly wider than shoulder-width grip; but not too wide as some people falsely claim is an effective way to build lat muscle width – we stimulate those hard to reach outer lat muscle fibers. In fact, such is the degree of muscle activation the lat muscles experience when engaged in chins that they are today considered the best lat width exercise in existence.
I recommend chinning twice a week: once on back day, as the first exercise in your workout, and once on an “off day”, at least three days after having trained them in the first session (all other body parts can, if desired, be trained once per week, while I feel back is one area that is often needing to be “brought up” and thus can be targeted more often – let logic decide). Rep ranges for chins – when using bodyweight – can be between eight and 15. Once 15 are easily reached then begin adding weight to intensify one’s efforts (and to burst a few more blood vessels).
Carve abs of steel
In training my clients I have found that the abs generally are targeted by these extremely motivated individuals more often than other groupings; trainees feel that they must work the abs every day “to burn the fat off them.” This is a myth that refuses to die. Indeed, like all other muscle groupings the abs must be worked, and then rested, in a routine which provides for the ideal balance between stimulation and recovery and rebuilding. What many enthusiastic gym goers do not realize, however, is that they should stimulate, not annihilate, when expecting new muscle growth.
The abs present a dilemma, though: how often should they be trained to 1) build them sufficiently and 2) keep them from becoming too wide? I have personally found that, unlike other body parts, the abs can become too large, thus throwing of one’s symmetry in the worst possible manner. Nothing detracts from an otherwise nice physique like a wide waist. Therefore, my recommendations are as follows: train your abs using 2-3 bodyweight-only movements and one weight-assisted exercise two days per week for around 25 minutes following cardio on one’s non-weight training days. Do not water down your mass building sessions by including abs.
These smaller muscles can, as suggested, be effectively trained on “off” days where they can be maximally targeted. Further, to enhance abdominal development stay tight when performing leg movements such as squats and leg extensions; these movements, when done with correct form, really activate the abs. A secret: I personally built a respectable set of abs through activating them during lower body movements - over a three year period - without once having trained them specifically. Of course, they became that much better once targeted training was added, but I think you get my point.
One final abs training tip: eat well. By consuming a diet conducive to fat loss and muscle building you will create the space needed to reveal your abs. You never know: perhaps you already have a nice six pack waiting to be released from the burden that is extreme flabbiness. Lose the fat first, and then assess the amount of specific abs training you will need to do.
Conclusion
From distinct eras that have hosted, at one end, great bodybuilders such as ‘50s champion Steve Reeves through to latter day giants like Ronnie Coleman a great V-taper has proven to be an occupational requirement. To build one of your own it is worth digesting the key points featured in this article as through these you will be well on your way to maximizing your genetic potential. Get off the couch and into the gym, and begin your quest to build a physique that you can be proud of. 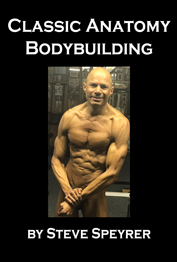