The following is an excerpt from my book, The Magic of Symmetry 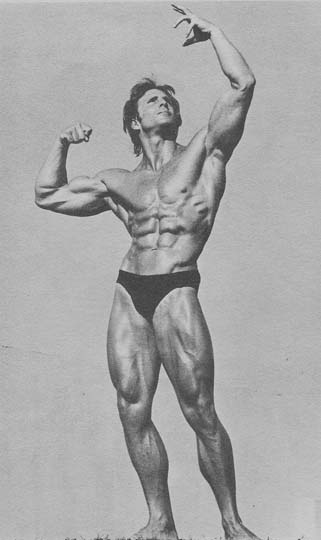 Before seeking to attain a symmetrical physique the trainee must know exactly what he is striving for. The optimum symmetrical physique is one of varied qualities. As mentioned in the foreword the first outstanding quality to be considered is maximum shoulder and waist differential. The deltoids should be developed to the fullest with a squareness achieved by special emphasis on development of the lateral head (side delt). The trapezius should not be overly full. The pectorals should be as square as possible (this is determined by heredity). The delineation of these large chest muscles should be deeply etched. The pectoralis minor (upper pec) should be developed to its limit. The major or lower pec should not be overdone. The line between the two pectorals should be striated and defined.
The arms should be slightly out of proportion to the rest of the physique. Just a bit too big for everything else. All three heads of the triceps should be developed with cross striations throughout the muscle. Special attention should be placed on the later (outer) head and the low tricep (length of tricep is also a function of heredity). The biceps should have both heads developed equally with plenty of low bicep and peak. Maximum development of the cephalic vein that runs down the biceps is also to be considered. The forearms should be full and very vascular with equal development of inner and outer musculature.
The thighs should be evenly developed with both quadriceps muscles over the knee as square and evenly matched as possible. Deep cuts in the thigh are a must. The side of the thigh must have as deep a cut as possible between the front thigh muscles and the leg biceps. There should be a good degree of sweep on the side of thigh tapering down to a small knee.
The calf should be diamond shaped and low. This diamond should taper down from a small knee joint to a proportionately small ankle. From the rear, the calf should be split and evenly developed from both sides. Deep cuts should accent the outer heads of the gastrocnemius and soleus. The leg biceps should be as muscular as possible. This long muscle should be tapered and sweep from the base of a small, but muscular gluteus maximus (buttocks) to the back of the knee. The gluteus should tie in nicely with thickly developed and cross striated erectors. The obliques should be muscular but seem underdeveloped comparatively. The latissimus should be built to their fullest. The rear trapezius should be thick and will defined. Deltoids should tie in with proportionately less developed upper traps. The biceps should show good peak from the rear. 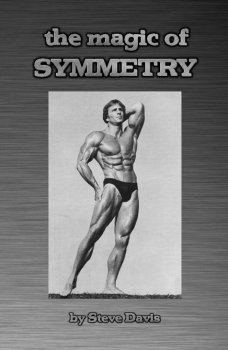 Remember, you can never have shoulders that are too wide. Your arms cannot be overdone if proper balance between biceps and triceps is maintained. The erectors cannot be too thick. The upper pec cannot be overdeveloped. No one ever exhibited too big a calf. The thigh can never be too cut up. Maintain as dazzling a taper as possible. The other muscle groups can be overdone. Keep this in mind and picture the symmetrical ideal as you train.